Mangum Watches- The Nightmare Before Christmas

It’s Christmas time! The guys review “The Nightmare Before Christmas” in large part due to a special recommendation… The guys discuss the film and offer final grades, and along the way enjoy a typically freewheeling conversation that touches on a variety of topics.

The guys continue their rewatch of slasher movie originals. This time with John Carpenter’s “Halloween.” The crew like this one better than the others they’ve seen so far. 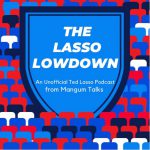 Spencer and Lee review an emotional episode of Ted Lasso. Spencer leads the recap, we award Trainwreck of the episode, run through the Sportscenter Top 10 and end with Life Lessons with Ted.

This is the third week of our coronavirus quarantine episodes. The guys drink from their own increasingly dwindling supply and talk about how they’re fairing during this odd time.

Succession Season 2 Episode 10- “This is not for tears”

I wonder if the sad I’d be without you would be less than the sad I get from being with you.

It’s the politics podcast! Please don’t take anything we said in this podcast seriously. We have no idea what we’re talking about. This is part two of our rye episode. Ryes tasted (in the first episode and this one) are Mid Winters Nights Dram and George Dickel Rye.

This is the second part of an episode recorded on November 3, 2019. The guys discuss technological change, the quirks of working at a University, daylight savings time and just what the hell you can do with peanut butter whiskey. Whiskies tasted are Glenfarclas 12 and Screwball Peanut Butter Whiskey.

In this episode of Whiskey on the Weekend, the guys hit the #onbrand segment. Shockingly, Spencer still writes checks and Lee has an announcement. Whiskey tasted is Burning Chair bourbon.

In this episode, the guys discuss a wide range of topics that includes their thoughts on genetically modified animals, the future of printed books and great vacations. Also, Lee learns just what the hell a Tardigrade is. Whiskey tasted is Makers Mark Cask Strength Bourbon. We had some audio issues with this one, so apologies […]

In this episode of Whiskey on the Weekend the guys hit the #onbrand segment, which includes Spencer and BJ being forced to go to a doctor, Lee unnecessarily scaring his coworkers and Spencer becoming an IT guy? Whiskey tasted is Special Reserve Gold Spur Whiskey from Cowboy Country Distilling.

This is part two of an episode recorded on September 22, 2019. In this episode Lee tells the guys about an antique whiskey tasting he attended. Predictably, BJ has thoughts. Also, Spencer takes aim at the Impossible Burger. The whiskey tasted is one of the best we’ve had, Willett 4 Year Rye (Rare Release).