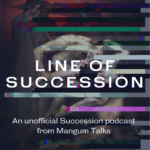 A thousand eyes and one.

You can edit out the sound of me pouring wine right?

In “deference” to the upcoming season premier of GoT, we’ll be doing a special episode of Mangum Reads! We’ll be doing the second in the Dunk and Egg stories ‘The Sworn Sword’. https://awoiaf.westeros.org/index.php/The_Sworn_Sword Also after our coverage of this and Midnight in the Garden of Good and Evil we’ll be moving on with ‘The Fifth […]