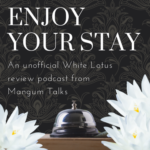 Spencer and Lee review episode 4 of White Lotus season 2. Segments include: recap with Lee, Best Line of the Episode, Best and Worst Vacation Partners of the Week and Death Predictions. If you’re enjoying the podcast, please rate and review!

In honor of Halloween, the Mangum Talks guys a variety of candy and give their takes. Also, Lee debutes his “Grand Werther’s Succession Theory.” Good times, all around.

The guys do the dew and perform a taste test of Mountain Dew Flavors. It goes about how you would expect.

Spencer, Lee, BJ and Levi pick up their review of “Attack on Titan.” In this episode they review episodes 9 & 10.

The guys continue their review of the anime series “Attack on Titan.” In this episode they review episode 5 and 6. The show is really hitting a groove now.

The guys continue their review of the anime series “Attack on Titan.” In this episode they review episode 3 and 4. Lee has questions but is slowly coming around…

Spencer teaches the guys about anime! The guys review two episodes of three different anime series, as recommended by Spencer. Lee actually watched most of them.

In this behind-the-scenes episode of Mangum Talks, the guys discuss the Elizabeth Holmes trial and other things before starting to record

Return of the Obra Dinn Playthrough

The guys review their playthrough of the video game “Return of the Obra Dinn”- Spoiler: it made Lee sick but the other guys enjoyed it.

In keeping with the holiday theme, the guys review Polar Express. This one got a bit contentious…

Mangum Watches- The Nightmare Before Christmas

It’s Christmas time! The guys review “The Nightmare Before Christmas” in large part due to a special recommendation… The guys discuss the film and offer final grades, and along the way enjoy a typically freewheeling conversation that touches on a variety of topics.

“Over the Cracker Barrel”

After a long break, Mangum Talks is back! BJ shares green tea brewed with roasted rice with the gang. Everyone gives their review and the fellas chat about any and everything.

The guys do another shared dinner. This is the Spencer is lying episode. He starts with the Great Burrito Lie and we end with a game of “is Spencer lying?” as he shares with us purported Leach family history.

In this episode, Spencer sends everyone an Ice Cream Cake and explains that Ice Cream Cake is a common treat in his household. Spoiler- Lee let his melt

In this episode, BJ shares some very interesting canned tuna with the guys. We try Dong Won Tuna with Hot Pepper. Not so surprisingly, we had differing opinions on the quality. We also discuss the departure of Roy Williams from our alma mater UNC Chapel Hill. Lee is still getting over it.

In this episode, the guys buy each other dinner again and discuss who got what. This one starts with BJ, yes, BJ, questioning if we might be ordering too much food. Later we chat about food history and favorite food cultures. We have a good time doing these and hope you enjoy them.

In this episode, the guys all send each other dinner and discuss who got what. This is the first time we tried this and it ended up being a lot of fun. Also, Lee got a surprise for BJ…

The fellas review some high-priced soaps that Lee provided. They review the soaps, discuss their soap-buying practices, and chat about a variety of other topics. This one was a lot of fun.

In our inaugural pod of shared experience we enjoy some olfactory enlightenment. Levi sent the guys scented candles and they all do a quick review. The fellas also discuss why Levi likes scented candles, generally, and a few other issues du jour.