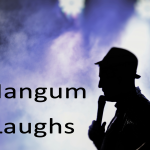 Laughs returns to review Colin Quinn’s “A Drive-In Comedy Special” This one was shot during the pandemic and there is a lot for BJ and Lee to unpack. This special is available on HBO Max.

BJ and Lee discuss one of the most legendary stand up specials of all time, Richard Pryor’s Live in Concert, filmed in 1979. They really enjoyed revisiting this iconic performance. They discussed the content of the special, Pryor’s influence on standup comedy and touched on particular details of his life.

In this episode, Lee and BJ review Bill Burr’s latest Netflix special “Paper Tiger.” They discuss what they thought worked and didn’t work with the set, and discuss Bill’s work and consistent tropes more generally.

Mangum Laughs is back! In this episode BJ and Lee review Dave Chappelle’s new Netflix special “Sticks and Stones.” They enjoyed it and didn’t really understand all the controversy around this special. It’s definitely a throwback set, ripe with offensive takes and hilarious rabbit holes. Good times all around.